A tribute to a man with a heart of gold! 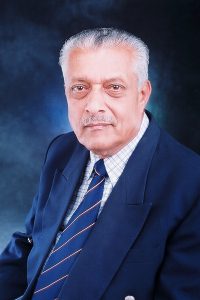 ” A great soul serves everyone all the time,
A great soul never dies,
It brings us together again and again.”

A proactive leader, a mentor, a Rotarian, a philanthropist, Ambalath Bala Guptan, dearly called Dr. A B Guptan is no more. Leaving a void that’s difficult to fill in many areas of his activities, Dr. A B Guptan has touched the lives of many, making a difference of a lifetime!

Being the visionary Founder of Shantiniketan Educational Institutions in Bangalore that runs two schools, one college and a B Ed Centre, Dr. A B Guptan adopted three Government Schools in Bilekahalli, Bangalore. His hard work has resulted in the distribution of mid-day meal for all the students in these three government schools. Thanks to his volunteering efforts, the needy students of these schools are today eligible to get free uniforms, books and shoes.

One of the swanky residential areas in the Garden City, Mico Layout owes its architectural expertise to Dr. A B Guptan. He was the architect and secretary of Mico Layout, a residential area with thousands of sites located in South Bangalore that was developed in the late 1970s. He was also instrumental in setting up the first temple in the locality which was a welcome sight to the early residents of the area. He enhanced it by adding a small hall on top which permitted residents to conduct marriages and other functions conveniently.

Hailing from an agrarian family in Palakkad, Kerala, he was an active Rotarian and Vice President of South-east Rotary Club in Bangalore.He was awarded with ‘Paul Harris Fellow’ – the highest international award in Rotary Club. He initiated a wide range of social services at various and distant locations in Karnataka and Kerala.

Among Malayalees in Karnataka, he is their dear ‘Balettan’. Hailing from Ambalath House – an agrarian joint family in Palakkad district of Kerala, he recognized the need for creating a bond among families in the community. He founded the BMS – Bandhu Mithra Samajam in the year 1991. BMS has since then worked with the key objective of uniting people and members of the community. He worked to rekindle the spirit of joint family into today’s ‘self-centered city lifestyle’. His efforts revived closer, warmer and more harmonious bonds among Malayalees in the region.

He was also instrumental in the computerisation of Government Hospital at Katampazhipuram in Palakkad. More importantly, his contributions had resulted in assuring uninterrupted power supply to the hospital, which is a great feat that is sure to save the lives of many in the generations to come.

Born on 10th October 1935, Dr. A B Guptan received his Doctor of Philosophy in Education – from US Cosmopolitan University, Jefferson City, Missouri, USA. Apart from this, he had a string of degrees to his credit. He has travelled far and wide in India and as well as abroad. Over the years, many organizations and institutions across the country felicitated Dr. A B Guptan for his significant achievements in the field of social reforms and education. He is also bestowed with the following accolades:

Very few people can lay claim to have led such a full life of a KARMA YOGI.

Get a deep understanding of your child!